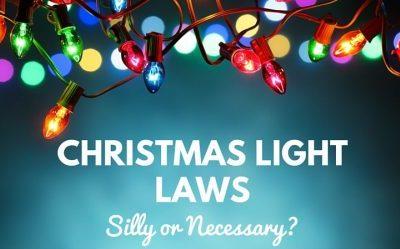 Legislators sometimes make silly laws. It's happened throughout the history of America. And it's not just a thing of the past, as the above examples show. Whether or not they are actively enforced, all of those laws - and many other silly laws - are currently on the books (in 2015).

What About Christmas Light Laws? Are They Silly?

Many states and municipalities have enacted Christmas light laws. There are laws regulating the kinds of lights you can use, and where, how, and when you can use them.

Are those laws silly? Or are they prudent and necessary? In many cases, silliness is much like beauty: it's in the eye of the beholder.

In San Diego, for example, you'd better have your lights down by February 2. Many people might consider that a prudent and proper law, preventing the displaying of Christmas lights out of season - an act that seems to infuriate some people beyond all reason. But others happen to like the look of Christmas lights, and prefer to enjoy them all year long.

Who's right and who's wrong? Is San Diego's law silly or essential? It just depends upon whom you ask.

Most likely the laws in your area are not unreasonably restrictive.

That's not necessarily the case, of course. In Guilford, Connecticut, for example, only white Christmas lights are to be displayed.

Massachusetts once even outlawed Christmas altogether - though that was several centuries ago.

But whether you agree with them or not, it's a good idea to know about any local laws that might relate to your Christmas display. After all, the law is the law!