Does Your HOA Entryway Offer a Warm Holiday Welcome? Or Does it Scream 'Scrooge'? 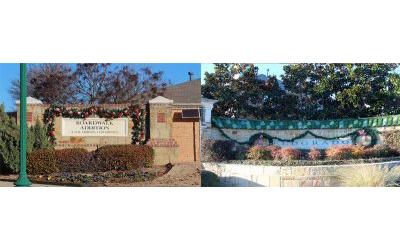 First impressions are important. A wise old saying tells us that's true. And modern-day scientific research supports the wisdom of the old saying. That's why many homeowners associations spend a considerable chunk of change on making entryways appear elegant and stately.

But for many HOAs, that wisdom seems to fly out the window when the holiday season arrives.

A Tale of Two HOAs…

The accompanying photos show two HOA entryways. Both were obviously designed and built with the intention of making a grand first impression. Both achieve that goal - most of the year.

But while both could benefit greatly from the addition of a well-designed Christmas light display, one HOA's holiday decor clearly outclasses the other.

One entryway is decorated with a beautiful Christmas garland, which adds an elegant touch of holiday festivity. It's a simple display, and certainly could be made much more impressive. But it's a good display.

But the other display…well, it's rather sad. Even a bit embarrassing. It's 'decorated' with wreaths and a garland that looks like limp spinach leaves strung on a string. This HOA obviously went cheap with their holiday display. And they got what they paid for (we happen to know they purchased their décor from Walmart).

So which entryway would give you the warm fuzzies as you entered that HOA's little corner of the world? The entryway with the simple but elegant holiday decor? Or the one that screams 'Scroogeville'?

We've been in the business of installing professional Christmas displays for many decades. And we've decorated many homeowner association entryways. So we know that many HOAs handle their holiday decorations just like businesses, understanding the importance of the impression their décor conveys.

But others go the cheap route. They dig a bit of pocket change out of their treasury and throw it at a few well-meaning volunteers who aren't really sure what to do. And they end up with something like the 'limp spinach' display.

While there's no doubt that your HOA can obtain a fine holiday display by having it professionally designed and installed, that's not the only route to holiday decorating success. There's a happy medium.

By just carefully choosing what you buy and where you buy it, you can have a warm and welcoming display for your HOA on a very modest budget. Buy a quality garland from a reputable supplier of Christmas décor, for example, rather than a 'limp spinach' garland from a big-box store.

And if you'll be involved in planning the next holiday display for your HOA, feel free to give us a call. We'll be happy to offer some tips and suggestions.

Don't Let Your Neighborhood Morph Into Scroogeville During Christmastime

It always makes us wince a bit to see an HOA entryway decorated like the 'limp spinach' display. It just looks so awful on an otherwise grand and ornate entryway. And it sends such a negative message to everyone who sees it.