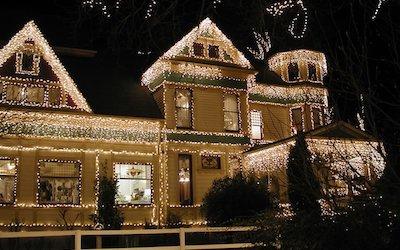 Build excitement for the season by counting down the days to turning on your Christmas lights.

But here's the interesting thing about switch-on day: among Christmas Enthusiasts, it's almost as unique as fingerprints. Because everyone has their own idea of when the switch-on day should be. 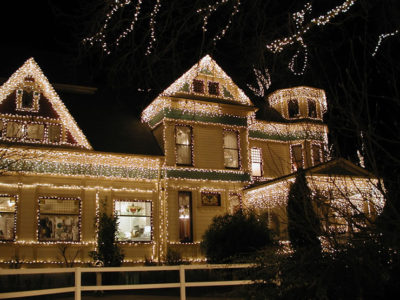 There's No Such Thing As Too Early…

Just as beauty is in the eye of the beholder, the proper date for the switch-on day is up to each individual Christmas Enthusiast. That's why you'll see Christmas lights start switching on in your neighborhood across a wide range of dates.

Right around Thanksgiving is a popular switch-on time for many people. Others prefer to wait until the month of December rolls around.

And for some Christmas Enthusiasts, earlier is better. Valerie and Robert Heath, for example; the Heaths' switch-on date is in September. And they start preparing for Christmas decorating months ahead of time. They've been doing it that way for decades.

Too early, you're thinking? Nope, there's really no such thing as too early - or too late.

But if you want the switch-on day to be today? Then so be it!

We often write about the many great benefits of LED Christmas lights. Things like tremendous energy efficiency and incredible durability. Those qualities have helped many Christmas Enthusiasts redefine switch-on date.

Has Your Countdown Begun?

Have you started the countdown on your switch-on day? If not, it certainly isn't too early to begin the countdown.

By the time you read this, in fact, the Heaths will probably have already thrown the switch. Their Christmas lights are probably shining every night. And now the Heaths are counting down to Christmas itself.

And if you don't traditionally countdown to a targeted date for switching on Christmas lights, why not give it a try?

It's a great way to help your family build anticipation of the holiday season. You can involve the kids, too, by letting them take turns crossing days off the calendar. Each day crossed off brings your family one day closer to switch-on day - and to Christmas.

Specifying a switch-on day is also great for helping keep your plans on track, and making sure you have all the light and décor supplies you'll need for this year's Christmas display.

So tell us…when is YOUR switch-on day going to be?