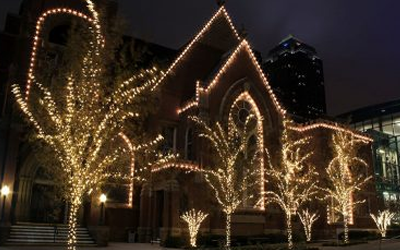 When shopping for LED lights, Christmas enthusiasts and commercial Christmas buyers are often faced with a decision: whether to buy a C9 LED retrofit bulb and light line or a stringer light set. Or both! It's a question that can be rather confusing for a newbie to the world of LED Christmas lighting, so let's spend a moment clarifying the issue. 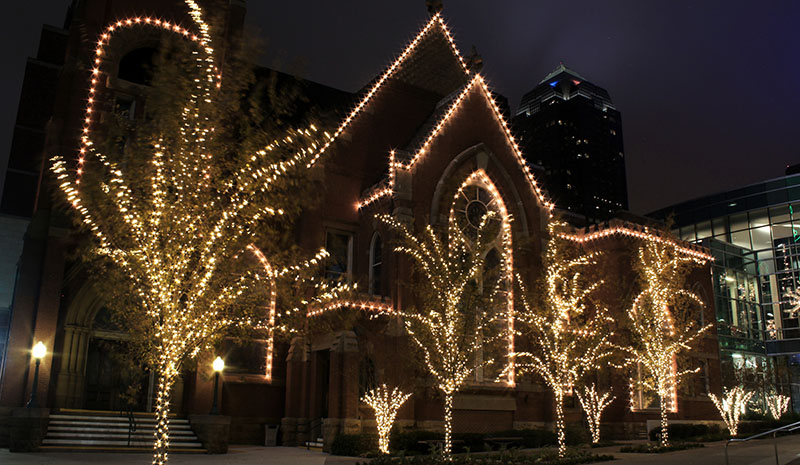 1. C9 LED Retrofit Bulbs and Cord - Each bulb is a completely self-contained unit. All of the bulb's electronics are incorporated in the base of the bulb. These bulbs can be used to replace incandescent bulbs on existing light lines, and are known as retrofit bulbs. The cord itself is known as empty socket light line, bulk light line, or simply C9 light line.

2. C9 LED Stringer Set - The light line and the bulbs on the line are manufactured as a single unit. The bulbs cannot be removed and replaced. This is commonly called a C9 stringer set.

When you're shopping for a product, your buying decision usually involves juggling the variables of quality, usability, durability, and price. So let's compare how these two products measure up against each other under each of those considerations. 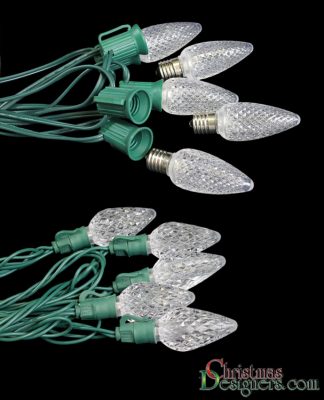 C9 LED retrofit bulbs (which are manufactured as self-contained units), contain multiple diodes within each bulb - usually from 3 to 5 diodes per bulb. But C9 LED stringer sets (bulbs and line manufactured as a single unit), contain only 1 diode per bulb.

The diodes within LED bulbs are the electronic components that generate the light that the bulbs emit; the more diodes within a bulb, the greater the light output of that bulb. So retrofit light lines emit a brighter light than stringer sets. Compare the two side by side and the difference is quite noticeable.

This advantage also goes to retrofit lines, and it's because of the difference in the method of manufacture between the two products.

Since stringer sets are manufactured as a single unit, each must be used in its original form. You cannot remove and replace bulbs. You cannot lengthen or shorten the string. If you buy a 25-foot stringer set and it turns out to be too long or too short for its intended purpose, you will not be able to modify it.

But since retrofit lines are not single units, they can be modified. Cords can be shortened or lengthened. You can even buy retrofit lines in bulk and create custom lines of any length you desire, ranging from just inches up to hundreds of feet. It's as simple as cutting the cord and adding a quick slide on plugs.

For some applications, the usability advantage offered by retrofit lines won't matter as much. When stringing lights through the foliage of large outdoor trees, for example, the length of the string isn't a critical issue - there's no need for concern that the line may too short or too long. Also, because there are so many bulbs scatter throughout the foliage of the tree, it's not necessary to have the maximum illumination that a retrofit bulb offers. For this type of application, using an LED stringer light set will handle the job without a problem.

Once again the advantage goes to retrofit light lines. And again, it's because of the self-contained design of the C9 LED retrofit bulbs. This design, with all of the electronics sealed into the base of the bulbs, offer two distinct advantages in durability:

1. Each sealed, self-contained bulb is more resistant to the ravages of weather, humidity, and time. Though stringer sets are also designed to be durable, there's simply no comparison between the durability that can be built into a single retrofit bulb versus an entire stringer line.

Stringer sets are considerably less expensive than retrofit lines of comparable lengths. So if the short-term cost is a major consideration in your shopping decision, the nod might go to stringer sets.

Just remember, though, that short-term costs won't necessarily translate into long-term savings. Because of the issues of durability and usability, C9 retrofit LEDs are likely the better buy over the long-term.

Though LED retrofit lines are clearly superior to LED stringer sets by most measures, you really can't go wrong with either product. That's because both products offer many advantages of modern LED lighting.

And that makes each clearly superior to old-fashioned incandescent lights.