How Are Colors Created in LED Christmas Lights?

In the long and interesting history of Christmas lights, nothing has shined as brightly as the light-emitting diode (or LED).

But what makes LED Christmas lights such a powerful light source? And how are colors created in LEDs?

The process that creates the light which emits from the LED is the same as with incandescent lights, electricity is consumed and then converted into illumination. However, LEDs perform this in a more efficient manner. How much more efficient? Generally, LEDs are as much as 3 times more energy efficient. They convert nearly all the electricity they consume into illumination, whereas incandescent lights lose a lot of their energy in the form of heat.

So not only are LEDs more efficient in how they use the electricity they consume but thanks to this effective utilization of power, they also tend to be brighter. But nowadays, this isn’t really news to anyone. Most people are aware of the electrical savings with LEDs as well as the fact that they have now surpassed incandescent lights in illumination intensity. But what about those colors? Are colors created in LEDs in the same way as they are with traditional incandescent Christmas lights?

The answer is a resounding NO. Color creation in LEDs couldn’t be more different.

Adding color to incandescent Christmas lights is as simple as painting the bulb the desired color. Want a deeper color? Then paint the bulb with a thicker coating of paint. Need a lighter color shade? Apply less paint. It’s as simple as that.

So, what about LEDs, how are the colors in LED Christmas lights actually created? It’s differently a far cry from the way incandescent colors are made. Let’s take a closer look at this process. 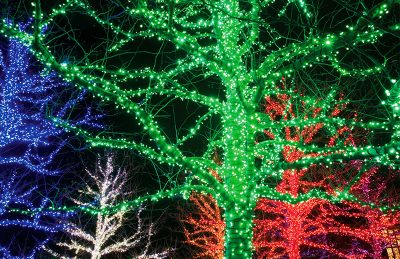 How are colors created in LED Christmas lights?

Color in an LED light comes from the material which is used in the semiconductor.

The two primary types, both together accounting for the entire rainbow of colors, include:

But how is this done? This is where things get a little tricky, so let’s break it down.

An LED is a p-n junction diode that emits light when activated. When voltage is applied to the leads of the semiconductor, electrons recombine with electron ‘holes’ in the diode itself which allows it to release energy in the form of photons. This process is called electroluminescence.

This activates the LED, but how then is the color created?

Depending on the energy gap of the semiconductor during this process– the difference between the two sides– a different color is given off.

The smallest gap would give off red moving all the way up towards blue if the gap is wider, allowing you to do everything from decorating your home for the holidays with reds and greens to getting festive for Halloween with spooky oranges and purples.

How are white LEDs created?

Without a doubt, white is the most popular color of LED Christmas light available. But how are white LEDs created?

We now know how colors are created with LED lights, but white wasn’t mentioned. That’s because it’s not created in the same way.

There are 2 methods for creating white LED lights: 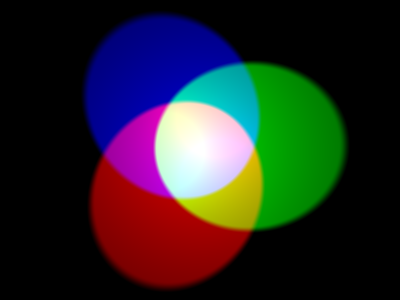 Believe it or not, unlike what it was like to mix paints when you were a kid, mixing the right combination of red, blue, and green LED light actually creates white light. However, if you’re familiar with the process, this is actually the same way a television creates the appearance of white on your screen.

In addition, this process can be adjusted to create more than one shade of white, including both warm and cool whites.

Blue LED with a phosphor coating

In addition to mixing red, blue, and green, white LED lighting can also be created by using a blue LED with a yellow light-emitting phosphor coating.

When the blue LED shines on the phosphor coating the two colors combine to create white light.

How does one LED emit multiple colors?

So far, we’ve covered how colors are created in LED Christmas lights, from the entire rainbow spectrum to the popular white LED.

But how does a single LED emit multiple colors at the same time?

For example, if the red and green LED are turned off but the blue LED is turned on, the LED unit will give off a blue light. The same goes for red and green.

Beyond that, if red is then turned on in addition to blue, the color changes to purple. If red is instead only conducted at 50% value then the color would be between blue and purple. By adjusting these values with various combinations of red, blue, and green any color in the rainbow can be created.

This is also essentially how color-changing LEDs are created. By starting with 100% blue and programming a gradual increase from 0% to 100% red, the light appears to gradually change from blue to purple.

We hope your new understanding furthers your appreciation of these beautiful and vibrant lights.