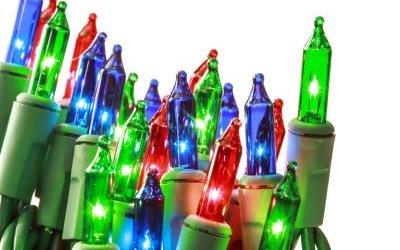 The Best Buys in Christmas Lights? Undisputedly LEDs. Here's Why… 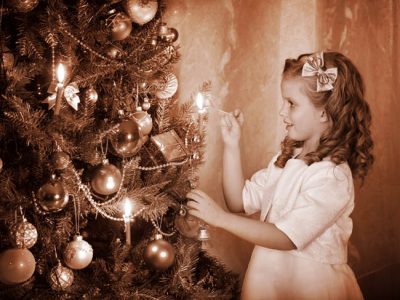 From candles to LED Christmas lights, a lot has changed in the past 100 years.

For many centuries, if you wanted to light up your home with bright and cheery Christmas lights, you had one choice - fire. Lamps and candles were just about the only options available, with candles serving as the go-to source of decorative Christmas lighting for most people.

Candles did a respectable job of providing holiday lighting and were a popular choice for adding an elegant glow to indoor Christmas trees.

But there was a definite drawback to using candles: tinder-dry Christmas tree foliage and sputtering candles formed an all-too-often lethal combo. Many happy holiday celebrations quickly morphed into a mournful dirge as a result of flash fires sparked by Christmas candles.

Home holiday lighting options improved considerably around the turn of the twentieth century when electric incandescent lights became commonly available. Incandescent Christmas lights were vastly safer than candles, and they were easier and more convenient to use. It wasn't long before the benefits of electric lights made them the top choice for Christmas lighting among the vast majority of consumers.

That new technology is known as LED lighting.

The Many Benefits of LED Christmas Lights…

If you make a straight-up comparison between the purchase price of incandescent lights vs. LEDs, the LEDs will appear to be more expensive. But that's a deceptive comparison, because long-term, LEDs will cost you considerably less than comparable incandescents. And along the way, LED lights will also offer you some nice ancillary benefits.

Here are some of the benefits that LED lights to offer over incandescent lights:

Be Careful Where You Shop For LED Christmas Lights…

Because of that - as the old saying goes - you get what you pay for when it comes to purchasing LED lights. If you pay cheap you'll get cheap. And as with most products, buying cheap may save you a bit in the near term, but will likely cost you more over time.

If you want to be certain that you're buying quality LED Christmas lights, steer clear of the big box retail stores. LEDs sold in those stores are almost always built cheap, bought cheap, and sold cheaply. And the quality is usually quite questionable.

Instead, buy your lights from a niche retailer that focuses on Christmas lights and decorations. A niche retailer will have in-depth industry knowledge and will be very aware of the manufacturers that offer top-quality products. They'll know about the manufacturers that should be avoided, too. And since the smaller retailer's reputation hinges upon the quality of products that they sell within their narrow niche of expertise, they're likely to avoid the cheap and low-quality merchandise that the mega-retailers are selling.

LED lights are relatively new technology. But although LED Christmas lights haven't been around all that long, they are rapidly supplanting incandescent lights as the go-to standard for Christmas lighting.

Some of the world's most famous Christmas icons are now lit with LED lights. The Rockefeller Center tree in New York City, for example, and the Capitol Christmas tree in Washington D.C. Cities large and small worldwide have converted to LED lights for their annual Christmas displays. Our own installation department is now installing nearly every job with LED lights. From single-family homes to entire cities, 95% of our installation customers are now LED.

If you haven't made the switch yet, this Christmas season would be a perfect time.