The store will not work correctly in the case when cookies are disabled.
Christmas Designers

What is the Difference Between SPT-1 and SPT-2 Wire 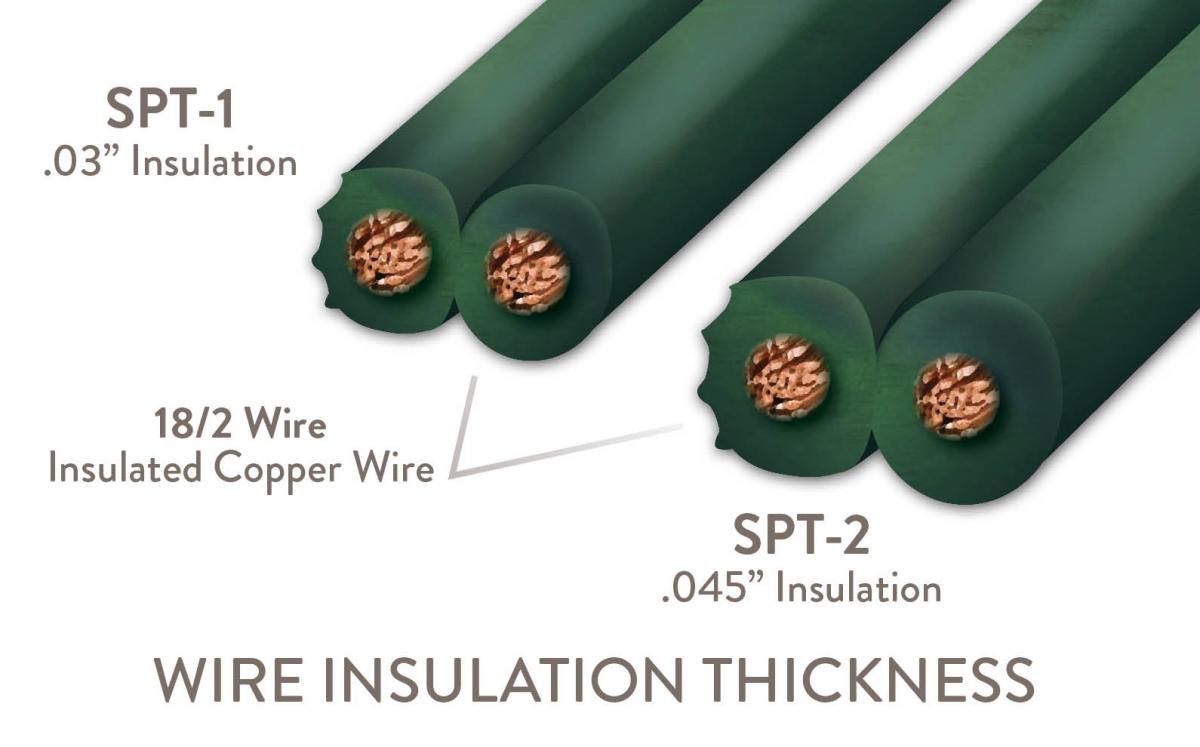 What is the difference between SPT-1 and SPT-2 wire? This is a question we get asked on a daily basis and anytime we write an article or put together a video about this topic, it always gets a lot of views. And the popularity of this information isn’t limited to only pro-Christmas installers and Christmas enthusiasts but is also sought out by folks that don’t have anything to do with holiday decorating. Asking about SPT-1 versus SPT-2 goes well beyond seasonal lighting. Anyone dealing with 16 gauge and 18 gauge electrical wire frequently wonders what the difference is between the SPT rating on the wiring they are using.

Before going any further, it’s important to state clearly that while I have been in the pro-Christmas industry for more than 20 years, I am not an electrician and while I am providing some guidelines that we use with our own installation teams, this information should only be used as a guide and not taken as expert electrical advice. Always consult a licensed electrician that is well versed in the National Electrical Code for the most up to date information regarding electrical specs and maximum amperage ratings. 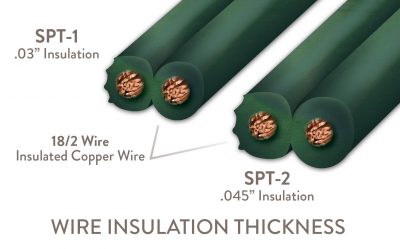 SPT-1 versus SPT-2 is not as straight forward as it should be and the answer to the question, “What’s the Difference”, has been debated and argued for many years. Unfortunately, there is a lot of bad information out there that only adds to the confusion. Recently, I did a search on this topic online and found that about 30% of the information is slightly inaccurate and another 40% is completely wrong.

In a nutshell, the difference between SPT-1 and SPT-2 is the thickness of the insulation. SPT-1 is .03” and SPT-2 is .045”. That’s the only difference physically between the two ratings. And most websites agree on that. Where things get messy is when the maximum number of amps is discussed. The majority of specs state that SPT-1 has a max rating of 7 amps and SPT-2 is 10 amps. This is not accurate. The maximum amperage load is determined by the amount of copper in the wire and the length of the cord being used. It has nothing to do with the amount of insulation. The bottom line, the only difference between the two SPT numbers is the thickness of the insulation. SPT-2 has 50% thicker insulation than SPT-1. It does not change the maximum amount of power the wire can handle.

The table below is what we use when training our installation crews and consulting other professional Christmas installers:

As you can see from the table above, the length of the cord is what determines the maximum about of amperage the cord can carry. It has nothing to do with the SPT rating.

So that brings us to the next question, which type of cord is better? Unfortunately, the answer is once again not very straightforward. In fact, this question has been argued more than probably any other question within the pro-Christmas industry over the years. Some of our installers and Christmas enthusiasts swear by SPT-1 and others won’t buy anything but SPT-2. The reasons for this vary significantly, but it typically comes down to one of the following four reasons.

Let’s take a brief look at each one of the reasons listed above and sort through the facts versus fiction.

This is the number one reason most people go with SPT-2 and as I stated previously, this is absolutely not true. Both cords have the same amount of copper, which in turn means they have the same maximum amp rating. If the cord being used is 18 gauge (a standard gauge for the Pro Christmas industry), then the maximum amperage is anywhere from 5 to 10 amps, depending on the length of wire being used. 10 amps for 0 to 50 feet, 7 amps for 51 to 150 feet, and 5 amps for over 150 feet. And with longer runs, especially more than 200 feet, you’re dealing with voltage drop, especially when C7 and C9 sockets are involved. Also, keep in mind that you should never run more than 250 feet of 18 gauge wire, which includes 18 gauge empty socket light line (C7 and C9 light line). For light line, we state the maximum run should never exceed 250 bulbs, or 250 feet, whichever comes first. Going with more bulbs or longer runs results not only in significant voltage drop, but also causes too much heat to build up in the wire, resulting in a potential fire hazard.

SPT-1 Doesn’t Hold Up as Well in Harsh Weather

For the most part, this is not true. We sell 18 gauge wire all over the world and our customers use it from tropical climates and on up into cold, northern regions. SPT-1 holds up very well in most conditions for seasonal Christmas lighting and decorating installations. Keep in mind that the wiring on Christmas lighting stringer sets is 22 gauge with relatively thin insulation. And even this thinner, less insulated wire holds up without a problem. So, the significantly more robust 18 gauge, SPT-1 does even better in more difficult environments.

There are a couple of situations where SPT-2 might be desirable. For installations where the cord is up beyond the standard 90 days of the holiday lighting season, it is a good idea to go with SPT-2. The thicker insulation will hold up better when exposed to long term UV light from the sun, especially during the summer months.

At this point, in order to avoid a slew of nasty emails and phone calls, I do need to point out that according to the National Electric Code, 18 gauge wire should only be used for seasonal lighting, which is considered 90 days or less. Granted, this is not a code that is followed very often, but it is important that I clearly state that using an 18 gauge cord beyond 90 days is not in compliance with NEC standards.

The second situation where SPT-2 should be considered is in extremely cold climates. As I mentioned before, SPT-1 holds up well in most conditions, but for the folks up in those extremely cold climates such as Alaska, Canada, and other far north areas of other countries, it wouldn’t hurt to go with the thicker SPT-2 wire. Frigid cold and ice can definitely push the limits of even the toughest electrical cord.

Cost Difference Between SPT-1 and SPT-2

SPT-1 is a lower cost than SPT-2, which does make it more appealing, especially to pro installers. Larger Christmas installation businesses can use hundreds of thousands of feet of C7 and C9 light lines each year, which means pretty good annual savings by going with SPT-1. For homeowners installing a few hundred feet of light line or making a few extension cords with 18/2 electrical wire, the cost difference between SPT-1 and 2 isn’t significant enough to be much of a concern.

Environmental concerns related to SPT-1 or SPT-2 is something that has only recently begun to come up. Because SPT-2 contains 50% more insulation than SPT-1, the environmental impact is more significant. Frequently, the general public and especially large businesses are eager to minimize environmental impact where they can. Using a cord that contains significantly more insulation, resulting in a higher carbon footprint, can be enough incentive for some people to go with SPT-1. While the majority of pro-Christmas installers and Christmas enthusiasts will not give this concern a second thought, it can be a deciding factor in environmentally conscious areas such as California, Colorado, and Oregon.

So, What’s the Verdict?

Which type of wire should be your go-to pick for your stock electrical wire and C7 and C9 lighting? The bottom line, it’s not really something that you should spend much time stressing over. Pick one and go with it. If you fall in with the 90% of people out there that are installing under normal seasonal lighting conditions and if you want the cord that is the easiest to find on the market, then go with SPT-1. 75% of what we sell is SPT-1 and it’s all we use of our own installations. But if you really like the idea of thicker insulation, then go with SPT-2. But regardless of which cord you go with, keep in mind that the males and females you use also have to be designed for the same SPT rating as the cord. So, avoid mixing different SPT types, otherwise, you’ll have a mess on your hands trying to keep your cord and plugs organized and not mixed up during the installation season. This is especially true for pro installers that use tens of thousands of feet of cord and thousands of plugs a year.