How Long Do You Leave Christmas Lights Up? 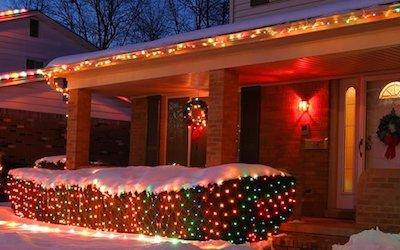 No judgment being passed here. (Hey - we're in the business of selling Christmas lights. So it would suit us just fine if everyone left their lights in place and lit 24 hours a day, 365 days a year!)

But it's interesting that the "Christmas season" varies so widely and wildly from person to person.

For this group, the bumper holidays of Thanksgiving and New Year's Day provide comfortable, clearly defined boundaries for the Christmas season.

Can You Really Get Too Much of a Good Thing?

Many people, though, seem reluctant to let go of Christmas. That's understandable. For most people, after all, Christmas is the happiest time of the year.

But if Christmas is the happiest time of the year, what does it mean when the Christmas season finally comes to an end? It means that you're now in the not-so-happy time of the year. And who wants that? So lots of people try to stretch out that happy time for as long as possible.

But the Thanksgiving-to-New Year group might argue that extending the season also dilutes the magical happiness of the season. Keep it short and keep it sweet - that's the way to go, they might say.

What Do YOU Say?

So what's your Christmas season like? Long or short? Does it begin and end according to clearly defined boundaries? Or does it start and end when you 'feel' like it?

There's no right or wrong, of course. Whatever works for you is what's best for you. But it really is interesting that the term "Christmas Season" holds such different meaning for so many.

And if your Christmas lights are still up, that's nothing to be embarrassed about. We think you're doing just fine.