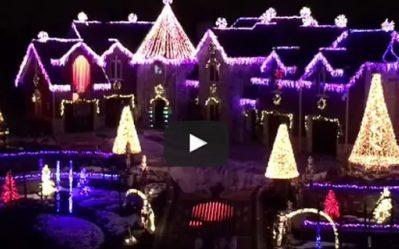 For most people, decorating the home for Christmas is just a nice way to make the house a little more festive and spread some holiday cheer. For others, it offers a chance to go over the top and make a display that will really get some attention. Elaborate Christmas light shows are nothing new, but in recent years, it has been elevated into a kind of art form.

Spending thousands of dollars, hours in preparation and racking up an electricity bill that could only be described as astronomical, these are some of the best Christmas light shows for the 2015 holiday season.

From San Antonio, Texas, the Johnson Family has been putting on their Dubstep Christmas light show since 2013. Even though it is only the third year for their big light extravaganza, this is a display that is already well known across the country. They run the show every night from 6 pm to 10pm, and one entire cycle takes a full 11 minutes to complete.

Created by Maureen and Carl Seaward of Christchurch, New Zealand, the Christmas light show that they put on in their backyard is a popular seasonal attraction. With more than 9 months of total preparation, over half a million lights and 11 trains running through the display, it is an awe-inspiring Christmas display. It runs from 8:30 pm to midnight during the Christmas season, and visitors can get the full experience by paying a $5 entry fee.

El Paso businessman Fred Loya’s Christmas light show is well known to the residents of the area, and it is one of the best in the United States. With more than 450,000 lights all set to Christmas music, it makes for an impressive show that people from around the area can catch any night, starting at 6 pm during the Christmas season.

With thousands of lights programmed to synchronize with a variety of different songs, the Christmas light show created by John Storm from Cedar Park, Texas is another entry that belongs right at the top of the list. It takes nearly the full twelve months for him to get all of the sequences programmed and he includes a long tracklist for music, with the show set to the Star Wars theme being one of the most popular.

In Elizabethtown, PA, the Christmas light show from Messick’s Farm Equipment is amazing. The shows run every 15-20 minutes during the holiday season, and they have parking for people to sit in cars and watch the show. You can even tune your radio to hear the music that is synchronized with the lights.

The annual Christmas light show from California’s Slayer Bob has become the best-known Christmas display that features heavy metal music. With songs from bands like Slipknot, Slayer, and Pantera, it is definitely one of the more unique light shows out there.

With more than 120,000 lights and a 36-foot tree, the Cranberry Christmas light show from Keith Shaw of New Jersey is a spectacular display. It has over 20 songs with the lights and shows synched for every track, and it is free to park and free to watch.

This is a big Christmas light show in Elburn, Illinois that runs every night from 5 pm during the Christmas season. The big attraction is the programmed light show that features the new Blackhawks Theme and on Saturday nights, the show gets a visit from Santa.

Coming from Chaska, Minnesota, the Staudt Family Christmas light show is in its second year. It includes more than 6,500 lights, and it plays a variety of songs. The show plays from 5 pm every night and visitors can tune their car radio to a station programmed to broadcast the songs that are featured.