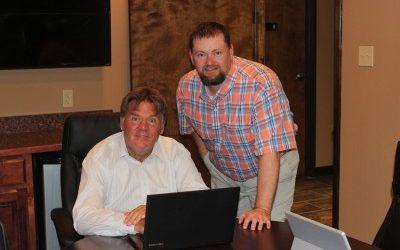 It's turning out to be a BIG summer for the Christmas Designers team!

We told you last month about our impending move to a big new warehouse. It's a 50,000-foot warehouse with room to expand to 75,000 feet.

And what often happens when families move to larger homes? They get bigger!

That's what's happening to our family - it's getting bigger. But the new additions aren't exactly babies. They're very experienced, very capable professionals. And they're going to help us bump up our game to a new level.

So here's an introduction to our two new family members:

Steve is going to be responsible for helping us make the most of that big new warehouse. And he's well equipped to do so. Steve has more than 20 years of management experience with big-time companies such as Subway, Hobby Lobby, Academy, and Gander Mountain.

Steve is originally from Altus, Oklahoma - not too far down the road. And he's lived in Sherman for nine years, after moving here to become the Hunting/Firearms Manager for Gander Mountain.

Steve's wife, Kelley, is a first-grade teacher. For Steve and Kelley, most weekends revolve around watching or coaching 10-year-old daughter, Kylee, on the softball field or basketball court.

Gary is going to ensure that our rapidly expanding operations keep running with clockwork precision. Gary has lots of experience with making things run smoothly. He's spent the last 10 years in the courier industry, working for Miller Transportation in San Antonio, TX.

Gary started as a local manager in Denver, and then worked his way up to the position of Operations Manager, overseeing 31 multi-state locations. He also has years of experience in sales and retail in Memphis and Denver. And he spent some time serving as a west coast Operations Manager based in Los Angeles.

Gary is originally from eastern Ohio and moved to North Texas with his wife of 33 years, Sandie.

The Best Is Yet to Come…

A new home and new family members - it's been a pretty good year so far!

But the best is yet to come. After all, the windup to the Christmas season is just around the corner. And we're poised to have the biggest and best season we've ever had.

But then we also get to have a bigger, better real Christmas season than ever before. And that means that we're better positioned than ever to help all of our Christmas Enthusiast friends and customers have their best Christmas ever.

So here's looking forward to Christmas 2015. It's going to be a great one for all of us - especially with the help of Steve and Gary.

Welcome to the family, guys!